We are proud to announce that Hanaa Malallah was featured in the touring exhibition ‘Refuge and Renewal: Migration and British Art’ curated by Peter Wakelin. This is yet another feat of international recognition for Malallah. The exhibition traces and explores the important influence that artists who sought refuge in Britain had on the development of the local British art scene over the past 150 years.

As you will see in the video (appearing at 33:26), Malallah’s work exhibits alongside artists such as Kurt Schwitters - whose work she loves and is inspired by. As well as Claude Monet, Camille Pissarro, Walid Siti and Piet Mondrian, among others. All the artists appearing in the exhibition also sought refuge in Britain.

The exhibition was first shown at the Royal West Academy Bristol from the 14th of December 2019 to the 1st of March 2020, and was to be continued at the Museum Of Modern Art Machynlleth from the 14th of March to the 6th of June 2020 but could not continue due to COVID-19.

Hanaa Mallah's is represented at Karim Gallery in Amman, Jordan 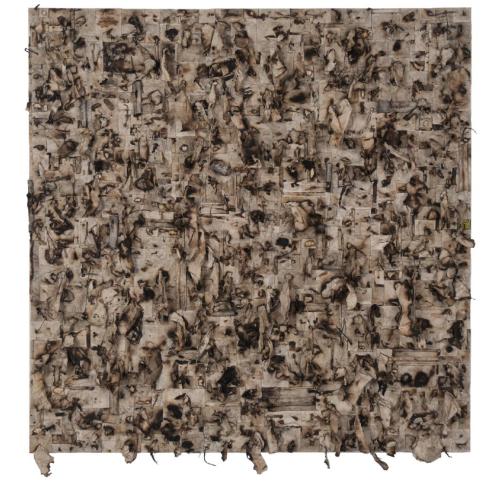 Shroud IV (2012). This piece appeared at the exhibition and is not with Karim Gallery.